At present, international environment has undertaken profound changes, China's domestic reform has entered a crucial period and is making difficult structural adjustment. As a result, China's economy has experienced some changes and worries in the course of stability, and the economy is facing downward pressure.
How to view the current economic situation in an objective and comprehensive manner? How to correctly interpret the connotation of “changes in stability and worries in change”? Sheng Laiyun, deputy director of the National Bureau of Statistics, was interviewed by Economic Daily.

Why is China's economy running stably?
Q: In recent years, China's economic growth has slowed down. But why do we still think the economy runs stably.
Sheng: The “stability” of China's economy mainly means that the economy continues to grow within a reasonable range.
First of all, from the perspective of economic growth, the slowdown of growth is relatively smooth, and the fluctuation range of quarterly growth rate in recent years is not large. Preliminary calculations show that in 2018, China's GDP reached 900,309 billion yuan, an increase of 6.6 percent in comparable prices, and a realization of the expected development target of around 6.5 percent. The quarterly growth rate in 2018 is 6.8 percent, 6.7 percent, 6.5 percent and 6.4 percent respectively. It has been operating in a narrow range of 6.4 percent to 7.0 percent for 16 consecutive quarters, showing high stability and resilience.
Secondly, the employment situation is generally stable. For the whole of 2018, 13.61 million new urban jobs were created, exceeding 13 million for six consecutive years, and 123.7 percent of the annual target was achieved. The surveyed unemployment rate in urban areas remained between 4.8% and 5.1%, which was lower than the target of 5.5%. The employment situation is stable and promising. First, because the economy is now in a medium-to-high speed development stage, the economic increment continues to expand. Second, the proportion of tertiary industry in GDP exceeds that of secondary industry, which creates more jobs. Third, the change of population structure, especially the reduction of labor resources, has promoted the employment stability of enterprises to some extent.
Third, the price rises moderately. In 2018, CPI rose 2.1 percent from the previous year, below the expected target of around 3 percent. Core CPI, which excludes food and energy prices, rose 1.9 percent, down 0.3 percentage point from a year earlier. PPI rose 3.5 percent, down 2.8 percentage points from the previous year.
In addition, foreign investment and foreign trade performed better than expected. In 2018, China's imports and exports of goods totaled 30,505 billion yuan, exceeding 30 trillion yuan for the first time, an increase of 9.7 percent over the previous year. The surplus in goods trade was 2330.3 billion yuan, down 18.3 percent from the previous year. Trade in services grew rapidly, with exports of services up 14.6 percent year-on-year, the highest growth rate since 2011. Imports were up 10 percent year-on-year. Against the backdrop of a sharp decline in global cross-border investment, China's actual use of foreign capital was $135bn, up 3.0 percent from the previous year. At the end of 2018, the balance of the state's foreign exchange reserves reached us $3072.7 billion, recovering for two consecutive months, and the RMB exchange rate was basically stable.
Q: in recent years, China's quarterly GDP growth curve basically shows a orizontal line. Some question the authenticity of the data, and even suggest that the statistics department is faking the pace of growth. What do you think of this?
Sheng: Since 2015, China's GDP growth has fluctuated within a narrow range of 6.4 percent to 7.0 percent for 16 consecutive quarters. Such narrow range fluctuation is really not easy. But this is not the result of statistical control, but the actual performance of the increasing stability and resilience of the Chinese economy.
Theoretically, after eight years of growth slowdown, the Chinese economy has successfully from high-speed growth to medium-to-high speed growth. Growth rate is inclined to the potential growth rate of the stage. With service industry and consumption become the main impetus of the supply and demand sides, the stability and sustainability of economic operation are obviously improved, which is the inevitable result of the structural adjustment, transformation and upgrading.
From the relevant indicators of the same period, economic growth is well grounded. From 1979 to 2017, China's GDP grew by an average of 9.5 percent in real terms, fiscal revenue by 13.8 percent in nominal terms, total profits of industrial enterprises by 13.2 percent in nominal terms, per capita disposable income by 8.5 percent in real terms, and household savings by 22.8 percent in nominal terms. Without an average GDP growth rate of 9.5 percent, there would not have been so much wealth accumulation.
In 2018, China's GDP grew by 6.6 percent year on year, electricity consumption by the whole society grew by 8.2 percent year on year, railway freight volume grew by 9.1 percent year on year, and 13.61 million new jobs were created. Without growth rate of more than 6 percent, it is impossible to create 13 million new jobs every year.
This shows that the GDP index and other indicators in the current period are generally coordinated and matched, and the data are reliable. China's growth is also well grounded. 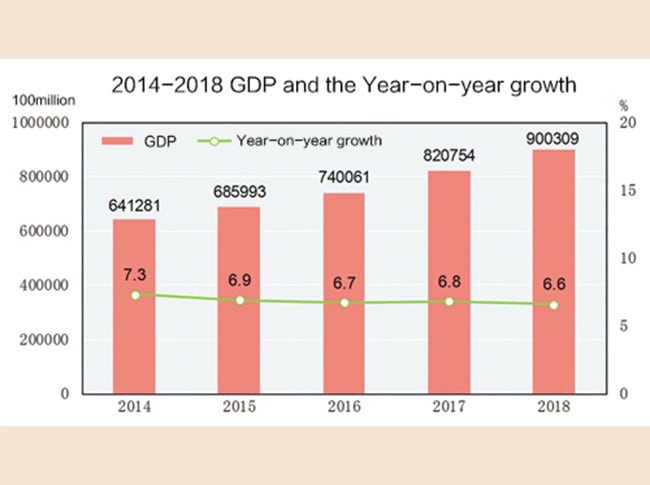 What is China's economic progress?
Q: In 2018, China's economy has made progress while maintaining stability. And what is China's economic progress?
Sheng: Economy has made progress while maintaining stability, and the progress mainly refers to the structural adjustment and transformation and upgrading.
First, we have made progress in supply-side structural reform.
In terms of breakthrough, in 2018, China cut more structural capacity, and the annual decapaticity tasks in steel and coal were completed ahead of schedule, and the utilization rate of industrial capacity nationwide was 76.5 percent, which was at a high level in recent years.
In terms of establishment, in 2018, new drivers of growth and new market players increased substantially, with 6.7 million newly registered enterprises nationwide, an increase of 10.3 percent over the previous year, and an average of 18,400 newly registered enterprises per day. The value added of the strategic emerging manufacturing sector grew by 8.9 percent over the previous year, 2.7 percentage points higher than that of industries above designated size. Investment in high-tech manufacturing and high-tech services grew by 16.1 percent and 12.9 percent respectively, outpacing total investment in manufacturing and services by 6.6 and 7.4 percentage points respectively. New forms of business developed rapidly. Online retail sales of physical goods grew by 25.4 percent year-on-year, 16.4 percent faster than the total retail sales of consumer goods. The number of express deliveries reached 50.7 billion, up 26.6 percent.
In terms of “reduction”, in 2018, the cost of per hundred yuan of main business revenue of industrial enterprises above a certain size was 83.88 yuan, 0.2 yuan less than that of the previous year.
Second, progress has been made in the three major battles. The effect of risk prevention and control is emerging. Local government debt is generally under control. By the end of 2018, the debt balanceChina's local government was 18.39 trillion yuan, and the local government debt ratio was 76.6 percent in 2018, lower than the internationally accepted warning standard of 100 percent to 120 percent. Adding the central government debt balance of 14.96 trillion yuan, the government debt ratio stands at 37 percent, lower than the warning line of 60 percent in the European Union and lower than that of major market economies and emerging markets. Macro leverage ratio stabilized. At the end of 2018, M2/GDP was 202.9 percent, 3 percentage points lower than the previous year. Micro leverage ratio decreased. At the end of 2018, the asset-liability ratio of industrial enterprises above a certain size was 56.5 percent, down 0.5 percentage point from the previous year.
We deepened efforts to lift people out of poverty. In 2018, the number of people living in poverty in rural areas was reduced by 13.86 million, about 280 poverty-stricken counties were lifted out of poverty, and 2.8 million people were relocated from vulnerable areas. Efforts to alleviate poverty in key areas such as industry, employment and education have yielded results, and the incomes of residents in poor areas have increased rapidly. In 2018, the per capita disposable income of rural residents in poor areas reached 10,371 yuan, an increase of 8.3 percent in real terms after deducting prices, 1.7 percentage points higher than the national rural growth rate.
Significant progress has been made in pollution control. In 2018, the average number of days with good air quality in 338 cities at or above the prefectural level was 79.3 percent, 1.3 percentage points higher than the previous year. The concentration rate of PM2.5 dropped 9.3 percent year-on-year. Total emissions of major pollutants continued to decline, and energy intensity continued to decline. In 2018, energy consumption per 10,000 yuan of GDP fell by 3.1 percent compared with the previous year, and the proportion of clean energy consumption increased.
Third, structural optimization has made “progress”. In terms of industrial structure, in 2018, the added value of the tertiary industry grew 1.8 percentage points faster than that of the secondary industry, accounting for 52.2 percent of GDP, and 0.3 percentage points higher than that of the previous year. It contributed 59.7 percent to GDP growth. The service sector has upgraded. In the first 11 months of 2018, the operating revenue of enterprises in science and technology services and high-tech services above the designated size increased by 15.0 percent and 13.4 percent respectively year-on-year. In 2018, the added value of high-tech manufacturing industry increased by 11.7 percent over the previous year, accounting for 13.9 percent of the total industrial output. The added value of equipment manufacturing industry increased by 8.1 percent over the same period last year, faster than the growth rate of all industrial output. In terms of demand structure, the role of consumption base was further consolidated. In 2018, final consumption expenditure contributed 76.2 percent to economic growth, 18.6 percentage points higher than the previous year and 43.8 percentage points higher than the total capital formation. In 2018, the per capita spending on services reached 8,781 yuan, an increase of 12.5 percent over the previous year and accounting for 44.2 percent of the total. This was an increase of 1.6 percentage points over the previous year.
Fourth, there is progress in the quality of development. In 2018, China's per capita disposable income grew by 6.5 percent year-on-year in real terms, basically in line with GDP growth and faster than per capita GDP growth. The total profit of industrial enterprises above designated size increased by 10.3 percent year on year. China's general public budget revenue totaled 1.83352 trillion yuan, exceeding 18 trillion yuan for the first time, an increase of 6.2 percent over the previous year. Moreover, labour productivity has risen steadily.
It can be seen that despite the difficulties of China's structural adjustment, the general trend of transformation and upgrading has not changed, and the economy is on the whole running smoothly with steady progress. These ahievements are hard-won.