Dual interest rates to stimulate the economy, that's why it can be done

The transition to a dual interest rate system would lead to credit growth and to greater share of resources transferred to the real economy. A powerful weapon in the hands of the ECB

A month after the start of the Lagarde Presidency, the opposition to a long-term negative interest rate policy becomes more vocal among European Central Bank (ECB) offices and several Eurozone finance ministries. Within a few days both the Governor of the Bank of Italy and that of the Danish Central Bank recalled the risks deriving from a deadlock in the ECB's monetary policy in the current situation in which the reference rates are well below 0 %. Furthermore, many analysts hoped for a rebalancing towards other instruments considered safer and more effective, such as the purchase of financial assets on the secondary market.
The main undesirable effects of negative rates are obviously the decline in the profitability of the banking system and the collapse of long-term rates of return on low-risk investments, essential in the management of pension funds. Concern is also growing about the transmission of negative rates to the deposit accounts of retail customers, even below the threshold guaranteed by the national guarantee schemes of 100 thousand euros.

The shift from monetary to fiscal policy
There has been much discussion on the need for the “baton” to pass from monetary to fiscal policy at a time when the European economy is slowing down, with a clear recession in the manufacturing sector barely offset by the stability of the service sector. However, the political resistance of some countries to a decisive fiscal expansion remains significant. What other room for maneuver could the ECB find, under the current regulatory framework, if the global economy were to deteriorate?
From a theoretical point of view, it is still possible to raise the bar of expansionary monetary policy using the interest rate instrument, while avoiding the policy's more detrimental effects of deep negative rates. An undifferentiated rate of -0.5% is currently in force both for deposits of commercial banks at the ECB and for loans to banks (including subsidized loans T-LTRO - Targeted Long Term Refinancing Operations), (see Figure 1); however, it is not mandatory that these two rates should be identical.

The functioning scheme of a t-ltro iii loan in the classic hypothesis of one interest rate for deposits in the ecb and loans to the banks
The latest expansive measures launched with the package announced on September 12 include three-year T-LTRO III loans to banks. The mechanism has a base rate of 0%; if banks provide credit to the real economy in a quantity such as to exceed the benchmark levels calibrated on their capital structure, they can get to “pay” (receive) an interest rate up to -0.5%, a level equal to that at which ECB bank deposits are taxed.
The transformation into a dual system
This scheme can be easily transformed into a dual system that amplifies the expansive capabilities of T-LTRO loans, as proposed in similar forms by several European economists, including the British Eric Lonergan. Consider in this perspective a hypothetical T-LTRO IV loan package (see Figure 2) which - with the same duration of the previous one - is offered at a negative rate of -1%; at the same time, however, the ECB does not reduce the deposit rate by the same amount but leaves it unchanged, or even increases it, bringing it for example to -0.2%.

INTEREST RATE DUE TO T-LTRO III

In this way banks could receive 1% loans, subject to the transfer of most of this advantage to customers, and at the same time they would pay a lower rate than the current one on the sums deposited in the ECB. This approach would therefore preserve the benefits of an expansionary stimulus to credit growth, and at the same time would reduce the main negative effects of the policy in force in terms of bank profitability.

THE OPERATING SCHEME OF A HYPOTHETICAL T-LTRO IV LOAN IN THE INNOVATIVE “DUAL” HYPOTHESIS: ECB DEPOSIT FACILITY RATE HAS INCREASED AND IS STRICTLY GREATER THAN THE INTEREST RATE FOR BANK LOANS

Interest rate due to T-LTRO IV 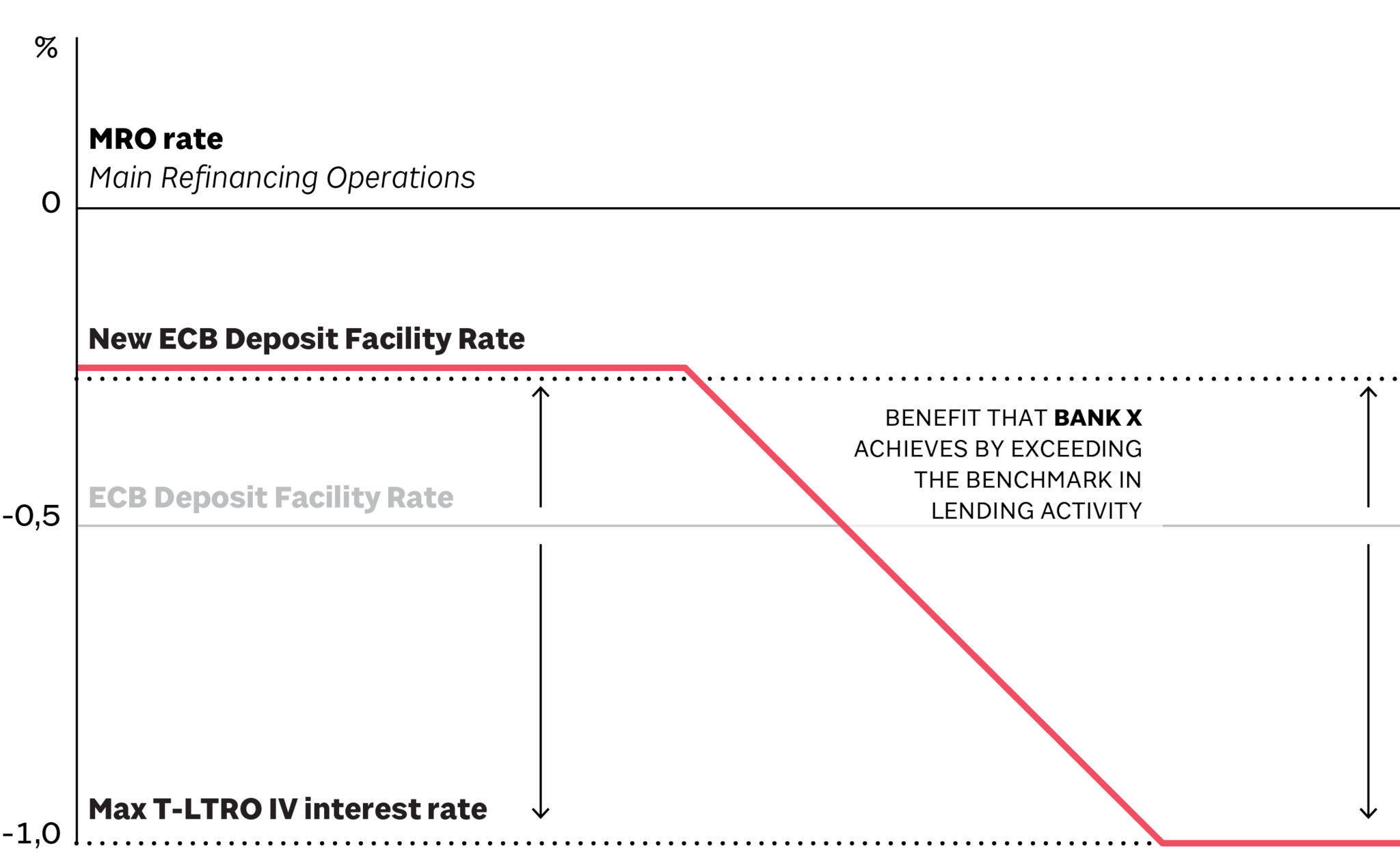 The advantage of this approach is its simplicity within the standard ECB regulatory framework, as well as its undoubtful effectiveness. The incentive for the growth of credit to the real economy is even more evident if we consider that the new loans will not be used by businesses and families in a single solution, but they will probably be deposited waiting for gradual spending. As a result, credit growth will cause a corresponding increase in bank deposits and ECB reserve accounts, on which banks will pay a less penalizing interest rate than the current -0.5%.
The analogies with the reserve tiering
This dual system undoubtedly implies a transfer of financial resources from the ECB to the economic system, a portion of which is “withheld” by the banking system through arbitrage operations. However, the proposal is not very different from the tiering system adopted by ECB, in which the central bank exempts part of excess reserves from paying the rate of -0.5%. Therefore de facto the ECB is applying two interest rates to support the profitability of the banking system, thus making an injection of liquidity financed by the reduction of profits accounted in its balance sheet.
The nature of the support is in both cases “almost” fiscal, because the erosion of the ECB's profit margin is reflected in lower profits returned to the governments of the Euro area in the following year.
The difference lies in the aims: the tiering was conceived exclusively as a measure to support the banking system to mitigate the effects of negative rates. From the preliminary data released in November 2019, the launch of the new rules triggered a major arbitrage operation between central bank accounts and a geographical reallocation of Eurosystem bank reserves.
The new dual system, which would differentiate between loan rates and deposit rates, would instead be an operation aimed at transferring additional liquidity to the real economy, while envisaging that part of the stimulus remain would be “trapped” within the banking system.
Why the two rates would increase flexibility
Having 2 interest rates enhances the flexibility of this monetary policy tool, making it less necessary to resort to unconventional alternatives such as large-scale purchases of financial assets. The Chinese experience is in this case a good example: Chinese central bank has set up a dual system of interest rates on bank loans / deposits since the 1990s, at first rigid (the rates were set by law) and then liberalized subsequently (see Figure 3).

After the last reform of August 2019, the People Bank of China (Pboc) governs its monetary policy mainly through the modulation of two benchmark 12 months interest rates on deposits and loans (Loan Prime Rate). Equally important for the short term transmission of the PBOC's policy is the reserve requirement rate (Reserve Requirement Ratio). As the graph clearly shows, in a context of positive interest rates PBOC sets the loans' rate at around 300 basis points above the deposit rate to guarantee an adequate margin of profitability for the banking system; the higher / lower the differential between the two rates, the more restrictive / expansive is the monetary policy.
In the unusual European case we would obviously find ourselves in a mirror situation, where the loans' rate would be lower than that on deposits and the higher/lower the differential between the two rates, the more expansive/restrictive the monetary policy would become. It is interesting to note that the use of multiple interest rates has so far allowed the PBOC to adequately manage monetary policy without the need to resort to other unconventional instruments. At present, the PBOC has never implemented QE-like policies of government bond purchases and, as stated by the governor Yi Gang only few weeks ago, will not announce it in the future.
Ultimately, it is not true that monetary policy has reached its limits and that the only possible step forward is a radical “helicopter money” drop. The launch of tiering has already pushed the ECB in an innovative direction that opens up to less invasive, gradual and politically more acceptable measures.