The heavy impact of the pandemic on the global labor market

According to the estimates by the International Labor Organization (ILO), in 2020 the number of hours worked globally fell by 8.8% compared to 2019. We are talking about 12 billion hours lost per week, the equivalent of about 250 million full time equivalent jobs that have evaporated (see Figure).

THE HEAVY IMPACT OF THE PANDEMIC ON THE GLOBAL LABOR MARKET

Annual change in hours worked per week. Calculations based on ILO estimates 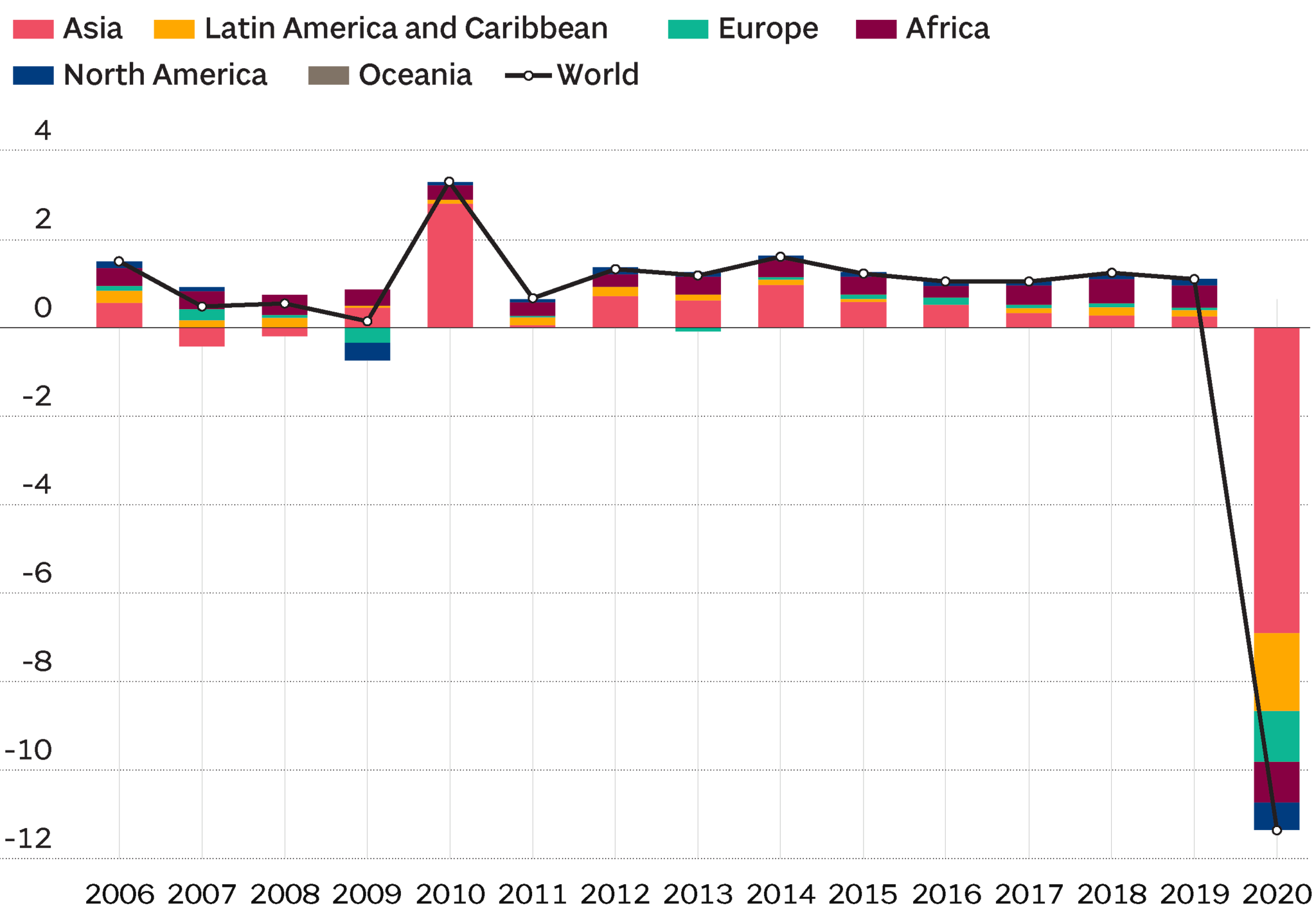 In absolute terms, Asia was the most affected continent with a drop in hours worked of almost 7 billion per week. Latin America and the Caribbean ranked second (-1.7 billion), followed by Europe (-1.2 billion), Africa (-900 million), North America (-620 million) and Oceania (-20 millions). Considering each region with respect to its own situation at the end of 2019, the worst performance was that of the aggregate formed by Latin America and the Caribbean, where in 2020 the hours worked fell by more than 15% compared to the previous year.

The collapse of hours worked in 2020 arose from the joint effect of heavy employment losses and of the reduction in the working hours of those who have retained a job.Last year, the global unemployment rate jumped to 6.5%, up 1.1% compared to 2019. This is the worst figure of the century: 33 million people lost their jobs compared to 21 million in 2009, at the height of the great financial crisis.

Globally, the hallmark of 2020 was, however, the sudden surge in inactivity (people who do not have a job and are not even looking for one) with a record increase of 81 million units, equal to 71% of total employment losses. The explanation of this data is quite intuitive: the total or partial closure of work activities needed to contain the infections made it clear to those who did not have work the uselessness of actively engaging in looking for one.

In terms of contribution of the different regions stands out the very high weight of Latin America and the Caribbean, where in the second quarter of 2020 inactive people increased by 41.1 million, practically accounting for half of the global figure. Although much lower (6.7 million), in Europe the growth of inactive people was almost 3 times that of the unemployed, with a particularly severe toll for Italy, France and Spain.

The reduction in the working hours of those who kept their jobs also contributed significantly (over 50%) to the overall decline in hours worked in 2020, further confirming the devastating effect of the pandemic.

Gross of various income support measures, the loss of labor income is estimated to have been $ 3.7 trillion, or 4.4% of global GDP. The greatest contraction in GDP terms concerned Latin America and the Caribbean (-7.8%), while in absolute terms the first place goes to Asia with lower labor income for over $ 1,400 billion.

The ILO also points out that these figures could underestimate the losses due to Covid-19 since, if there had not been the pandemic, in 2020 jobs would probably have increased by 30 million compared to the previous year. A partial recovery is expected in 2021, but in practice much will depend on success in fighting the pandemic. The situation in Latin America, for example, is particularly worrying also because many South American countries are experiencing great difficulties in stemming infections and deaths.

The impact of Covid-19 on the labor market has been terrible. Every policy-maker should keep this in mind to set political economy in the coming years and avoid the temptation of pro-cyclical measures such as premature cutting of the supports endeavored to the real economy.

The views expressed are strictly personal.