The problems of the lira and the moves of Erdogan

The latest move by Turkish President Erdogan to stem the large devaluation of the lira (-28.6% against the dollar in the first ten months of 2020) was the sacking of the governor of the Central Bank (CBRT) appointed by himself in July 2019. Two days later, the Minister of Finance also resigned for declared health reasons.

The unexpected news at the top of the country's two main financial institutions favored a rebound in the lira which last week recovered 10% against the dollar. The appreciation was supported by the relaxation of the restrictions on trading on currency swaps and other derivatives between local banks and foreign counterparties decided by the Turkish banking regulator. The decision – that reduces the borrowing costs associated with short sales of lire by foreign investors – came the day after Erdogan's statements about a renewed commitment to respect the rules of the free market.The new CBRT governor also spoke last week, suggesting an imminent rise in interest rates, probably already in the Monetary Committee on November 19.

According to some analysts, an increase of 500 basis points would be needed to stem the massive capital flight.At the base of this – as the previous Turkish crises – there is the fragility of the current account balance which has started to weaken since the end of 2019. The trade environment has further deteriorated in 2020, due to the collapse in exports linked to anti-Covid measures and the race to gold by domestic investors 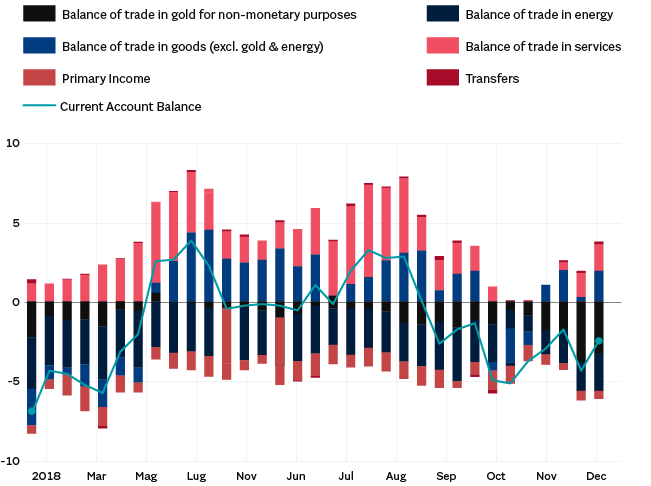 The consequent pressure on the devaluation of the lira to regain competitiveness was added to that produced by the capital flight. In turn, the collapse in the value of the domestic currency has stimulated inflation (now above 11% for months), already rekindled by the strong credit growth wanted by Erdogan to support the economy.

Despite the scenario described, the CBRT waited until August 20 before raising rates. In the meantime, to defend the lira, it preferred to draw on foreign exchange reserves and turn to state banks to discourage short sales of lira by foreign operators. These strategies worked little and more than halved foreign exchange reserves, whose reduction (-39 billion $) was only partly offset by the increase in gold reserves (+ $ 11 billion) due to massive gold purchases for monetary purposes.In addition, it has to be considered that the value of official reserves is ‘embellished' by currency swaps entered into with domestic banks and central banks of friendly countries such as China and Qatar.

In September 2020, the total value of these swaps exceeded $ 57 billion (+30 compared to the beginning of the year). The most significant jump was in May when the CBRT raised the cap of the dollar emergency liquidity line with the Qatari central bank from $ 5 billion to $ 15 billion.As a result of these operations, in recent months the gap between gross and net official reserves has widened considerably. Being official reserves the country's main guarantee on its external debt, their reduction poses a serious problem of sustainability of the short-term external debt (about $ 130 billion).

Moreover, the financial situation is also affected by developments on the geo-political level, where in recent weeks the escalation of tensions with Cyprus, Greece and France has led the EU to threaten sanctions against travel and tourism, which would have negative repercussions on the trade balance of Turkey.Meanwhile, the Turkish economy – like almost all global economies – is about to close 2020 with a contraction in GDP. A result that will not please Erdogan who just a year ago aimed at a growth of 5% for 2020. Now he risks reaching his goal but with a minus sign ahead.